Outdoor & Adventure Nature & Wildlife
With more than 4,850 km of coastline and 45,000 ha of marine reserves, the clear coastal waters of Tasmania offer some of the best temperate diving in the world. In the north-west, there’s good diving to be found at Rocky Cape and Boat Harbour, and plenty of wrecks to explore around Flinders and King Islands in Bass Strait. But one of the most popular dive trails is along Tasmania’s east coast. Throw your dive gear in the boot and explore the coast from north to south, from the kelp-covered reefs of Binalong Bay down through Maria Island National Park to Tasmania’s most-photographed shipwreck, the SS Nord, south of Port Arthur. Here are five of the best places to dive along the way.

Binalong Bay’s white sand gutters provide easy shore-based diving, great for beginners. Swim along the shallow rock-fringed sand gutter and through a thick curtain of kelp to find a series of rocky bommies (coral reef outcrops) where you can explore the caves and swim-throughs in search of crayfish, abalone and octopus. Nearby Skeleton Bay also has several rocky reef bommies where you’ll find large schools of fish and the occasional curious dolphin. 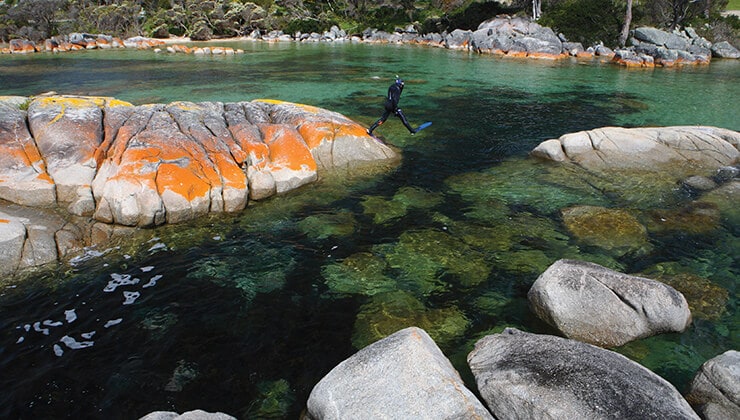 Bicheno is one of the most popular places to dive in Tasmania, with beautiful reefs covered in sea whips and colourful sponges. There are also at least six easily accessible shore dives at Waubs Bay, where you can expect to see big-bellied seahorses and weedy sea dragons as well as boarfish, butterfly perch and nudibranchs. At nearby Governor Island, the Rose Garden is a favourite for local divers – a mass of broken boulders covered with sea whips, large sponges and jewelled anemones. 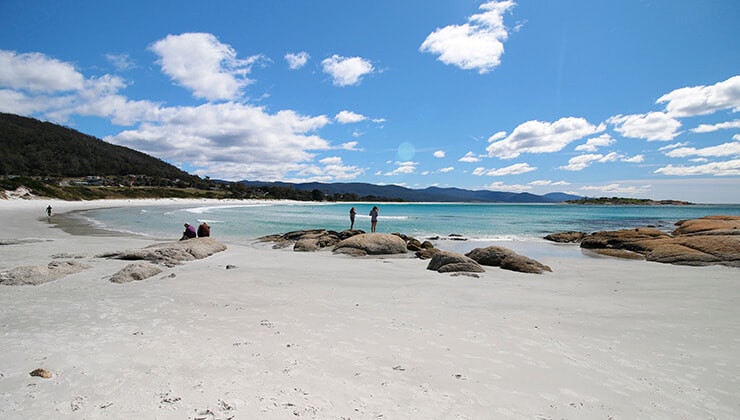 The Isle de Phoque, a rocky outcrop poking through the water’s surface north of Maria Island, is considered one of Tasmania’s most exciting dives. It’s home to a large seal colony and completely riddled with caves, several running right through the island. In the clear water around Maria Island you’ll find forests of string kelp, seagrass beds, sandstone reefs and large schools of fish. On the island’s south-west tip, there’s also a wreck to explore. The Troy D is a former coastal freighter scuttled in 2007 to form an artificial reef. Explore the engine room and take over the bridge, sharing the view with resident cuttlefish. 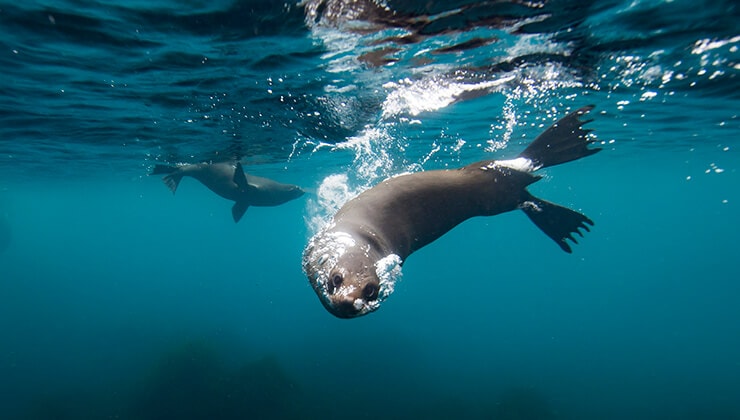 The Tasmanian peninsula has a large number of enormous sea caverns, tunnels and canyons, particularly in the Waterfall Bay area, where the caverns are easily accessible even for novice divers. Cathedral Cave is the largest sea cave system in Australia, with a massive entrance extending back into smaller caverns and narrow tunnels. 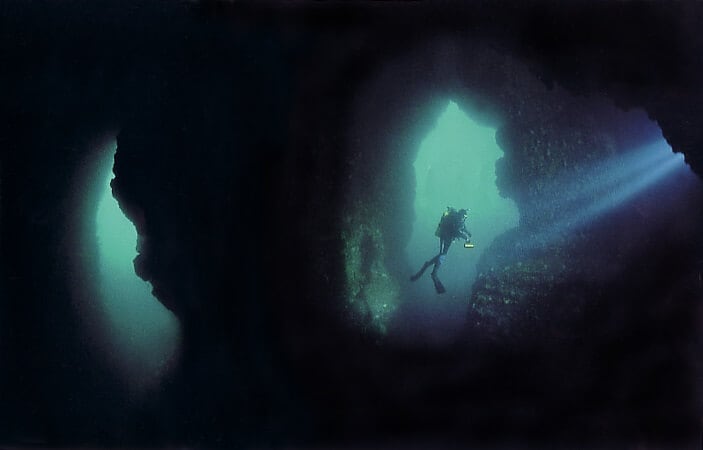 Fortescue Bay has an underwater wonderland easily accessed from the shore at 10 to 18 metres deep. In among the towering kelp you’ll come across a wide range of marine life including seahorses, seadragons, octopus, cuttlefish, crayfish and abalone.

Hire gear or book a boat dive at Bicheno Dive Centre. Further south on the peninsula, Eaglehawk Dive Centre can help you explore Cathedral Cave, there really is nothing quite like the atmosphere these underwater caves create. There are also several dive shops in Hobart and Launceston. 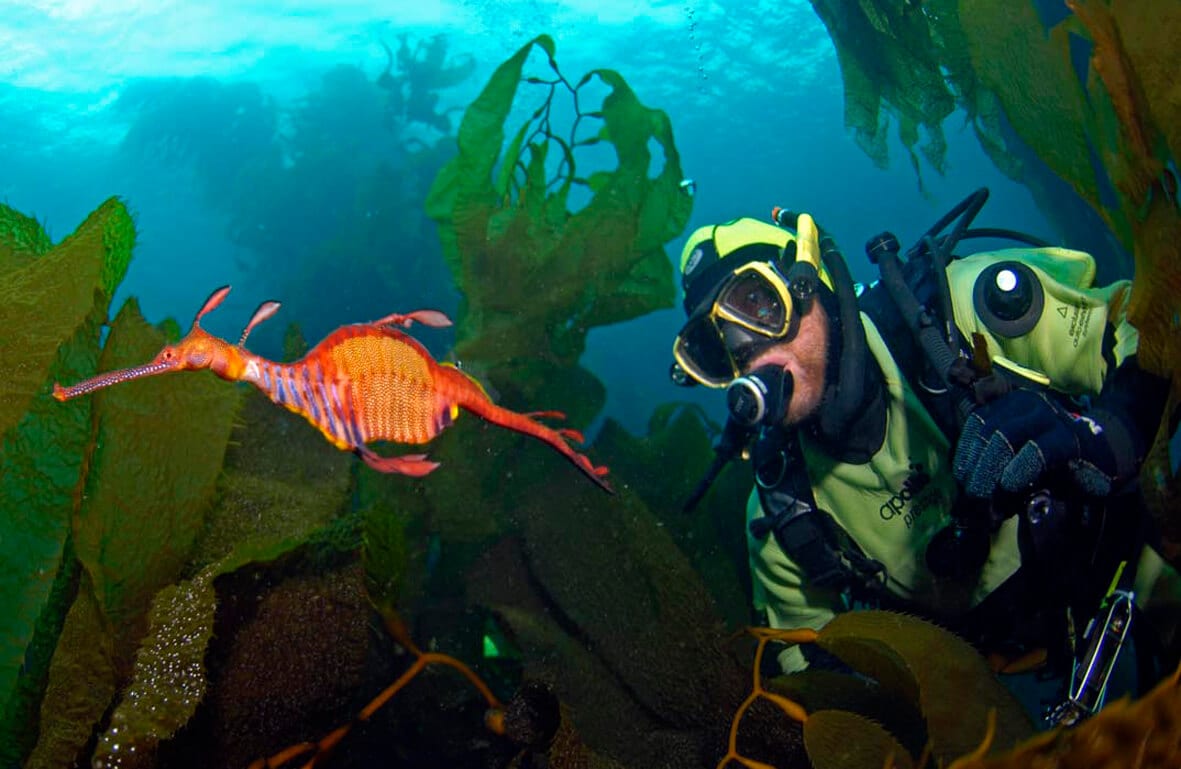 As the Coronavirus (COVID-19) situation unfolds globally and locally, we are unable to guarantee that the locations featured in this webpage are currently open for visitors. Please contact the individual operators for further information.

The health and wellbeing of our passengers and our staff is our highest priority. Find out more

Bring your car from just $99* extra each way

The best road trips start at sea. Book now and explore Tassie in your own car. Bring your car from just $99* extra each way! *Conditions apply Book now
Like this on Facebook
Share this article
Facebook Twitter
Browse the blog by category